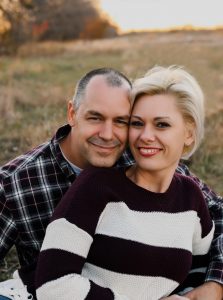 Bryan grew up in Englewood, Colorado. After graduating high school, he enlisted in the U.S. Army. He proudly served as an enlisted Soldier from 1992-2002, attaining the rank of Staff Sergeant. In 2002, he was accepted into Officer Candidate School (OCS). He proudly served as an Officer for the next 12 years. After 22 years of honorable service, Bryan retired in 2014. While serving in the U.S. Army, Bryan was assigned to multiple units with his last assignment being with the 20th CBRNE Command as part of Nuclear Disablement Team 3 based in Aberdeen Proving Ground, Maryland. Bryan was deployed for one combat tour in Iraq and two in Afghanistan. Bryan has a master’s degree in Environmental Management.

Trish grew up in Littleton, Colorado. She attended Western State College in Gunnison, Colorado earning her bachelor’s degree in Accounting and Business Management. Trish worked as an accountant for over 18 years before moving to Texas and exploring other interests.

Bryan and Trish briefly attended the same high school and met their freshmen year.  After going separate ways after graduation, they reconnected through social media and the rest is history.  Bryan and Trish, along with their daughter, and their rescued fur-babies moved to Fort Worth in 2016.

Bryan and Trish are avid animal lovers and are strong supporters of animal adoption. They currently have 3 rescues, Brady, an American Lab; Apollo, an American Pitbull; and Pebbles, a Staffordshire Terrier.

Bryan and Trish had long dreamt about being small business owners, but really did not know exactly what they wanted to do. Bryan learned about JDog Junk Removal & Hauling and started to research the franchise. In March 2021, Bryan and Trish attended JDog Discovery Day and immediately knew this was the business they wanted to be part of and grow. The original plan was to start a new franchise in the Bel Air, Maryland area, however, at Discovery Day they learned there was an existing JDog Franchise that was looking to sell. On June 6, 2021, Bryan and Trish became the new owners of JDog Junk Removal & Hauling NE Tarrant County.

Without missing a beat, there has been a seamless transition to the new ownership where we continue to provide excellent customer service. We do things the Military way – with Respect, Integrity, and Trust and have an amazing team that live by those values. We look forward to serving you!

We have used JDog three times over the past five years. Every time they give a courtesy call, show up on time and get the junk loaded quickly. The ...

I used JDog Junk removal and hauling last week. They were very professional and were here when they said they would be. Excellent job and the cost ...

Shane and Andrew came to my home for a job and were on time as planned, both were very courteous and they completed their work very quickly. Top ra...